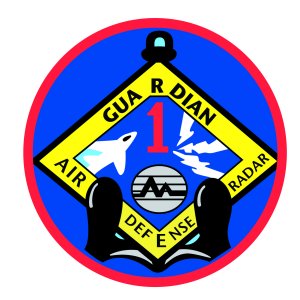 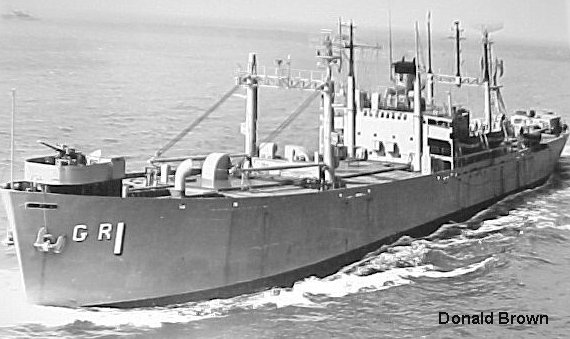 (2) Was the only Radar Picket Ship to have concrete poured (928 tons) on her main deck to aid stability.

The USS Guardian is the former SS James Squires. After conversion she was commissioned at the Norfolk Naval Shipyard on 1 February 1955. She was the first of the Navy's new class of Ocean Radar Ships, equipped with the finest radar and designated YAGR-1.

LCDR Robert E. Euliss, USN, Guardian's first Commanding Officer, and the commissioning crew of 120 men and 11 officers sailed from Norfolk VA, 4 March 1955, for training at Roosevelt Roads, Puerto Rico. They then returned to the shipyard for minor adjustments to the ship. During this availability, Guardian was ballasted with 928 tons of concrete poured 21 inches thick on her main deck to stabilize the ship at sea for better radar presentation. She became the only ship in the Navy to take her own sidewalks to sea. Guardian sailed on 2 June 1955, for Newport, RI, her first home port. Soon afterward she assumed her primary duty as a Radar Picket Ship, taking station off the East Coast of the United States. Her mission detecting, tracking and reporting aircraft that might penetrate the Continental Air Defense.

On 6 January 1956, LT Thomas J. Patterson, USN, relieved LCDR Robert E. Euliss, USN, as Commanding Officer of the Guardian. On 9 March 1956, LT Patterson was relieved by LCDR Donald P. Dyer, USNR. It was during those early years that the procedures and operations of the YAGR were perfected.

As part of the operational mission of the Radar Picket Ships, they detected all aircraft heading on a course that would penetrate the continental shore line. Upon detection, an aircraft was plotted and pertinent information concerning its speed, altitude and heading was established. A designated number was given to the aircraft and all associated information was continuously reported to Air Force evaluation centers ashore by use of radio teletype. At the evaluation centers - called SAGE Direction Centers - the contact information was fed into giant IBM Computers where it was processed along with information from other radar sites. There the contact was evaluated as friendly, hostile or unknown. Fighter interceptors from nearby air fields were scrambled to intercept and destroy hostiles or identify unknowns, the Picket Ships being given control of those fighter interceptors for use against unknowns or hostiles in their areas.

In August 1960, LCDR Joseph H. Ellis, USN, relieved LCDR Rogers as Commanding Officer of the Guardian. About this time as research was conducted to provide faster means of communication and transmission of detection and warning information, the USS Guardian (AGR-1) participated in a series of tests using IBM transceiver equipment installed aboard for transmittal of data from the ship to the Washington Air Defense Sector employing single sideband radio and land line link. This was the first known ship-to-shore transmission of this type and subsequently proved to be a major improvement in radar picket ship-air defense communications. At 5:03 PM, October 15, 1960 the Commanding officer of the USS Guardian (AGR-1) sent over this system the message, "If you are ready to play cards with my deck, I will deal." By January 1962, IBM transceiver and telesignal equipment had been installed in all ships of the Squadron and this ultimately became the primary means of transmitting air surveillance information to relay stations ashore for further land line transmission to NORAD Direction Centers.

During the month of June 1961, Guardian was ordered to take station south of Key West, FL and to track and report all aircraft inbound to, or outbound from the United States. In October 1962, Guardian was again ordered to take a southern station, this time off the eastern coast of Florida. This was part of the "Cuban Blockade", and during the entire Cuban Crisis, radar picket ships performed important roles.

Picket duty, at best, is not considered ideal duty, for in addition to lack of port visits in foreign countries, it is necessary to remain on station in all types of weather, typical of which was the winter of 1963-1964 (December picket), a picket which was not a pleasant one for the crew of the ship. They encountered continuous high seas and strong winds of hurricane force. The highest sea recorded was 45 feet and the greatest roll was 43 degrees. During that storm a large wave pushed in six feet of bulwark on the starboard side of the bow, and bent in the forward gun mount shield. Other difficulties were encountered: a fire was started in the galley when grease from a deep fat fryer spilled out and ignited during a heavy roll. Forced with poor to very rough weather from October to April, and hurricane weather in August to September of each year, Guardian men became sailors in the true sense of the word.

During 1963, the Battle Efficiency Award for AGR type vessels was developed. The ships of Radar Picket Squadron Two were evaluated in all aspects of administrative and material readiness and battle efficiency. Of the eight ships in the squadron, Guardian was the first to win the Navy "E" award. At appropriate ceremonies on 12 October 1964, Captain F.J. Gibson, USN, who represented Vice Admiral H. T. Duetermann, USN, Commander Eastern Sea Frontier, presented Guardian with the COMEASTSEAFRON Battle Efficiency award for the fiscal year 1964.

During the year 1964, Guardian spent approximately 68% of the time at sea, approximately 23 days at sea before returning to home port for approximately 14 days. By being at sea for the majority of the time, Guardian took part in many types of training programs, which included on-the-job training, air and surface training, battle conditioning, damage control, man overboard, first aid, physical training and all phases of shipboard upkeep. The import periods were devoted to loading supplies, upkeep of the ship, repairs and liberty for the ships crew.

Through the advance of military technology, it was found that the AGR had completed its mission in the Army-Navy-Air Force team and its work could be performed by other means. Thus, in February of 1965 deactivation of Radar Picket Squadron Two was begun.

On 5 April 1965 the IBM transceiver and telesignal equipment was inactivated with this closing message, "Final deal with my deck, it's been grand playing cards with you. C.O. USS Guardian".

Thus through its great scope of defensive early warning capabilities, the Guardian proved itself another unit which continuously demonstrated the tremendous value of sea power that the United States needs today. As our great carriers, cruisers, destroyers and submarines extend America's fighting arm to all corners of the globe, so the picket ships extended America's Air Defense System far over the seas in order to preserve the peace and safety of this Nation.